A number of MPs have signed up to support our jarrow march through an early day motion, tabled by John McDonnell MP. The reason why we are marching is against  mass youth unemployment, calling for a program of job creation, access to education and apprenticeships leading to jobs. We are marching through a whole number of constituencies and will be asking MPs and other representatives to support the march and its aims, but most importantly what they are doing to further these aims. As part of putting pressure on MPs, and gaining support for the march, please contact your MP and ask them to back the motion and back the fight against mass youth unemployment

PCS YMN article on the march

Recent figures have shown that the issue of unemployment still exists especially amongst youths. At present there are 965,000 16-24 year olds who are unemployed. Youth Fight for Jobs (YFJ) will bring this issue right to the fore by holding a march from Jarrow to London, starting on 1 October 2011 and ending on 5 November 2011.

They will be holding the protest to demand decent jobs and a free education for young people as this October will mark the 75th anniversary of the Jarrow March against unemployment.

YFJ, National Organiser Paul Callanan said: “Young people now face the worst attacks on our rights and living standards we’ve seen in generations. The government is determined to push through cuts that will limit opportunities for youth even further. They also want to see unemployed youth used as slave labour for big business by putting people on work for dole schemes. With the brutal attacks being made on the right to an education as well, we really feel that every avenue is being closed off for people who want a decent future.

“We will be marching from Jarrow to London in October to show this Con-Dem government that we will not see all the gains made by working class people over the last century blotted out of existence. We want to put the issue of youth unemployment right at the top of the agenda. As well as the march we will be building protests, demonstrations and rallies up and down the country in solidarity with the march, with the aim of linking up student activists, trade unionists, those fighting against the cuts and the unemployed.

“This is the time for young people to say; “we won’t be a lost generation! Fight for jobs and education!”

Youth fight for jobs are seeking volunteers to help raise funds and participate in the Jarrow March. You can volunteer to do all or part of the march as it takes various routes on the way to London. Email youthfightforjobs@gmail.com if you’d like to play a part in this historic event.

Supporting the Jarrow March on 26 March

youth fight for jobs will be having two big stalls at the start and end of tomorrows massive TUC demonstration. Feel free to come over and say hello! We’ll have loads of leaflets advertising the Jarrow march, stickers, copies of the YFJ newsletter the spark (see below) and more! We’ll update the blog tomorrow am when we’re there to let you know exactly where we are – hopefully the demo will be so big you’ll have to keep your eyes peeled! As well as updating the blog, we’ll be tweeting from the demo – follow us @yffj . See you there! 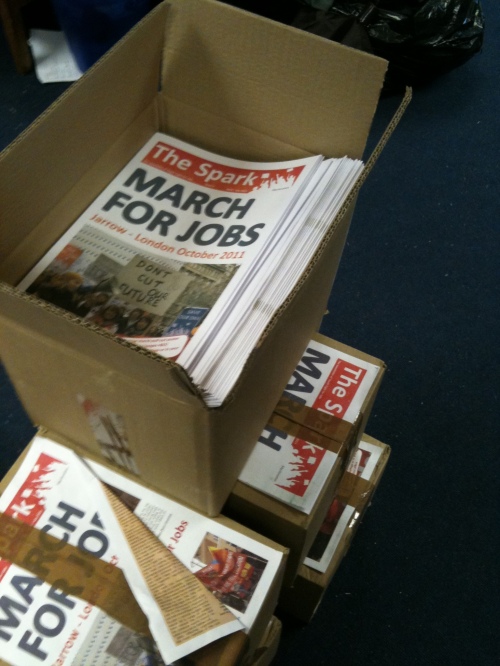 Here is some of the media coverage from yesterdays press conference, and a brief roundup of some of the coverage so far

Information packs for the Jarrow march

We have produced packs with all of the current information for the Jarrow march, including case studies, maps, press releases and details of our press coverage so far and a history of the campaign. please share, pass on, feel free to use in media articles covering the march. For more information contact us on the usual details.

Youth fight for jobs has produced stickers for the jarrow march, to help us raise funds. You can get them for 50 for £5 – comment or email in – youthfightforjobs@gmail.com – po box 858, London, e11 1yg

Today’s figures have shown that there are now almost 1 million unemployed 16-24 year olds in Britain
This year is the 75th anniversary of the Jarrow Crusade. In October of this year Youth Fight for Jobs is going to recreate that march.

This Wednesday, 16 March, at 11am in Parliament committee room 12, Youth Fight for Jobs will hold a press conference to launch the march. The press conference will hear from Matt Wrack, FBU general secretary, John McDonnell campaigning MP and college students and unemployed young people will also be speaking about their conditions and why they’re fighting back. Figures released today show that 974,000 young people are unemployed, continuing to leap upwards towards 1 million.

Paul Callanan, Youth Fight for Jobs, National organiser says; “These figures confirm what we have known for a long time. Young people are being made to pay for an economic crisis caused by the bosses and fat cat bankers. Instead of providing a future for young people this ConDem government in carrying out the most brutal assault on the rights and living standards of working people seen in generations.
On top of the million already put of work they plan to throw 700,000 public sector workers onto the scrap heap. We have already seen the brutal attacks on the right to an education. This government is closing off every avenue for young people to have a decent future.
We are recreating the Jarrow march because young people are facing the question around jobs and living standards as the original marchers 75 years ago. Today we have more to lose as the government attempts wipe out the gains in rights and living standards in the 75 years since the march.
We want this march to become a rallying point for the anti-cuts movement in Britain. As we go though towns and cities on the route we will hold protests and demonstrations against the government’s brutal austerity agenda. This October young people will be saying that we won’t be a lost generation, we will fight for the right to jobs and education!”

Youth Fight for Jobs was launched in January 2009 to combat the effects of the recession on young people. It is supported by Unite, RMT, PCS, CWU, UCU, Bectu and many local trade union and student union groups.
ENDS
To contact youth fight for jobs to arrange interviews or for further information, please contact
youthfightforjobs@gmail.com
020 8558 7947